Chris from Sound Fowndations visited me this week, he distributes Furutech products in the UK and was showing me some of their latest products.

Now I'm going to win no favours here with Chris, but I've never made it a secret that I struggle with the perceived value for money of some of the Furutech accessories, not their connectors - which when looked at closely show that a great deal of thought and time has gone into developing and making them, it's the slightly quirkier products that leave me scratching my increasingly balding scalp.

The Destat (the original hand held static reducer) was a perfect case in point, and this week I saw the new Destat II, which is at least prettier than the original (pictured below). 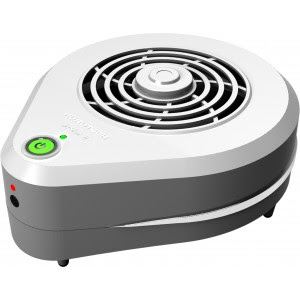 Neithers cheap looking plastic cases have the feel of a product that reflect their prices (if forget the exact amount but it was in the region of £350) and I cannot see what is so special (nay, costly) about a device that reduces static charges, this sort of thing is nothing particularly radical or new (or unique to the hifi industry), and their bumf does little to convince me otherwise. Even without getting my screwdrivers out they appear to be a fan blowing across some electrodes...

I also remain unconvinced that it's the problem that requires this sort of expenditure to solve, sadly I didn't get to properly experience what the Destat II did to CDs (it has a handy locator for discs to be placed on top of it) as their was traffic noise and a dem going on upstairs at the time, but on a very quick try here, in the showroom system the difference was either very slight or non existent (you only get one shot of course, so no chance to compare it to the original). .

What however did amuse me immensely was the neat 'toy' Chris bought with him to show how effective the static eliminator was. Made by Sunhayato the 'Locator' was a small gizmo that gave a reading of kV of the static charge of surfaces bought near to it. This is the sort of item that could prevent me getting any work done for days on end, the fascination of reading the static charge on all sorts of random objects just didn't seem to grow old.

What it did show was that the Furutech Destat II did make an obvious reduction in the readings we got, effectively reducing them to background levels. It was also interesting to note that the static charge of the CD drawer was much higher than that of the discs we measured.

What was quite curious was the reading I got off a fairly new pair of speakers, these were only a couple of weeks old and repeatedly showed a charge of 7kv on their tops, the highest of anything I measured here. A hand placed on the surface would see the charge disappear down to normal levels (seemingly about 0.5 to 1kv) yet within moments of removing, the charge fully returned, other speakers with similar construction around the area didn't exhibit the same behaviour so can only assume it was due to a coating on the wood veneer or one of the finishing processes. It's almost certainly an irrelevance, but interesting to note this behaviour. I don't know why, but we didn't think to see if the charge could be removed more permanently with the Destat.

Is this likely to mean anything sonically? I cannot see it myself, but it doesn't stop it being quite fascinating.

I think I will have to get one of these gadgets as I can see a real use for it, especially for looking at ways to more effectively reduce static on turntables (where even the greatest doubter of such things should agree that here's a situation where static is not only irritating but also at times audible) and for further experiments with the Nordost Eco 3 spray which does seem to have the static reduction properties claimed.

Of course it's quite possible that when it arrives I'll be spending my time wandering around measuring a multitude of surfaces rather than getting any actual work done...
Posted by Deco Audio at 02:29